Tuna can be broadly divided into “Otoro(Japanese)”, “Chutoro(Japanese)” and red meat.
If it is shown in the figure, it looks like this. 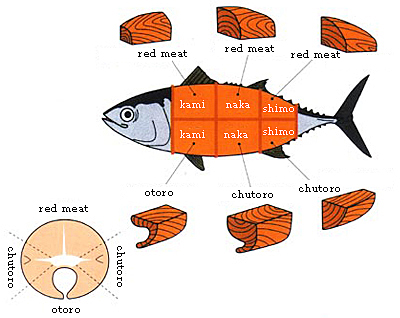 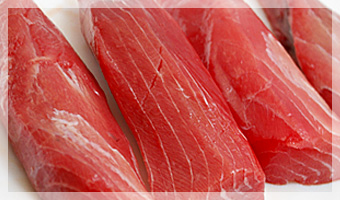 It is called “Tsuno(Japanese)” because the thing taken out by the kitchen knife with the body of the head part becomes the horn of a triangular pyramid.
The horn of bluefin tuna and southern bluefin tuna is very tasty with grease. 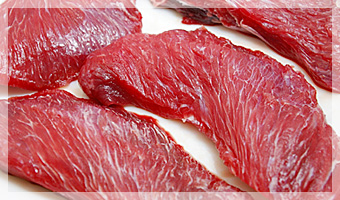 It is a muscle cut out tuna that moves tuna gills, it is common to eat through fire because there are a lot of muscle fiber.
Strong muscle streaks (fibrous) will become a unique texture by passing through the fire, exciting the purity.
A large tuna of 100 kg or more is useful, and since it can only take 2 (300 – 500 g) from one tuna, it is not very popular in general.

Kama
It refers to the part where the head is dropped and the hard part of the pectoral fin skin is cut off in a semicircular shape.
It is called “kama(Japanese)” because it resembles the shape of “bite” used to mow grass etc.
Although it can not eat as it is because it has big bones, it cuts to about 5 cm square and seasons with pepper etc. to eat the bone-attached body.
Tuna taste seeps out and it is the best for sake.
In addition, the part closer to the belly part head which split the main body into four is called “Harakama(Japanese)” and it is called the highest grade part of the tuna.

Sukimi
When you dismantle a tuna it will leave you in the bone. It is a knife, a thing that drops off with a spoon.
Also, carefully remove the remaining body at the head and tail with a kitchen knife etc.

Nakaochi
Things that scraped off the spine with spoon etc. left in the spine part of the trash.
It is very popular as it is delicious with no streaks at all. 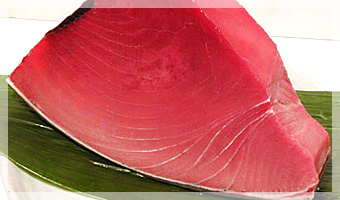 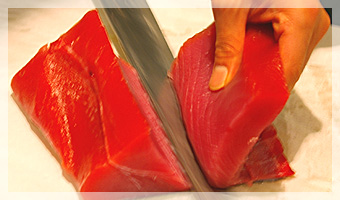 Contrary to slicing, it is a way to cut tuna in the vertical direction.
It is a rectangular plate shape about 2 cm thick.

Ketagiri
“Keta(Japanese)” is the width of sushi material and represents the width of the standard fingers (8 cm).
Depending on the sushi shop, it is 9 cm or 10 cm, but the standard is 8 cm. It cuts usually in the slicing direction.

Tendori
After cut digit in the direction of a sliced cut, it cuts part of Toro and lean part.
We call the part of the lean a “Temmi(Japanese)”.