Naturally-occurring material is solid in quality and thin in fat, you can taste the elegant original origin of tuna.
There are a lot of “toro” parts because cultivar is raised with bluefin tuna, Southern bluefin tuna with enough feed in the main, it is a perfect tuna for Toro lovers. The body quality is softer than that of natural products and color change is early.
In recent years research on bait has advanced and these drawbacks are gradually being improved.
About 30 years ago Wakayama Prefecture Kushimoto Kinki University Fisheries Experiment Station handled the animals of bluefin tuna quickly and the tuna spread quickly in the whole world.
“Cultivation” refers to growing big fish in a tuna fishery but in general it is commonly referred to as “aquaculture” which is not clearly distinguished between aquaculture and cultivation It is a lot. Recently, at the Kinki University Fisheries Examination Hall, we hatched eggs, hatched and succeeded in “perfect cultivated” to lay eggs on the tuna they raised.

Natural products are captured by the oceanic fishery around the world. The altruistic quality that survives rarely in the wild waves of the naturalworld is solid, the color of his body is also reddish and the color of the original tuna.
Even now, most of the amount of tuna landing is naturalized by red-based natural bigeye tuna, yellowfin tuna.
Aquaculture is dominated by bluefin tuna, southern bluefin tuna and in Japan, Wakayama Prefecture Kushimoto Amami Oshima etc. are the main producing areas of cultured tuna. Aquaculture has also begun in Shikoku and the Japan Sea coast.
Aquaculture of the Mediterranean coast (Spain, Italy), Atlantic bluefin tuna in the Gulf of Mexico and southern bluefin tuna in Australia is thriving and imported in large quantities in Japan.

Natural products bluefin tuna, southern bluefin Tuna’s catch is drastically reduced, and high-quality tuna with so-called “toro” part is drastically decreasing. Nowadays, the rise of greasy farmed tuna is the savior of “tuna” of the tuna industry has become. 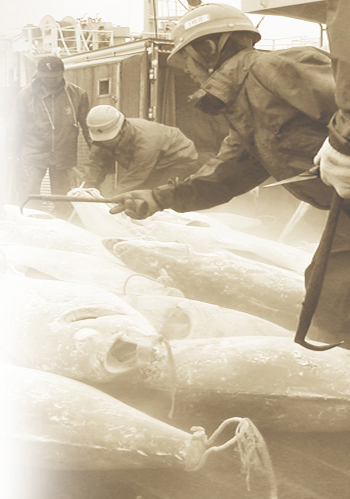